By Sam Walker on January 4, 2016
The Outer Banks Voice 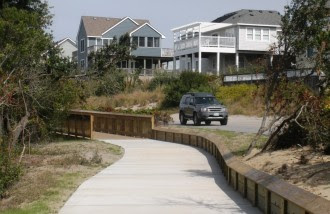 Currituck County commissioners have approved the selection of a contractor for the 3-mile long extension of the Corolla Greenway alongside N.C. 12 and construction will get underway this winter.

The concrete addition to the multi-use path will be 10 feet wide, and run from the south end of Ocean Sands section A to Monteray Plaza, said Eileen M. Wirth, project coordinator for Currituck County.

The low bid was submitted by Hatchell Concrete Inc. of Manteo at $1,581,657, and commissioners gave unanimous approval to the contract on Dec. 14.

County manager Dan Scanlon said the bid was about $275,000 below what the county had expected to pay, and all funds for the project will be paid for with collections from the county’s occupancy tax on vacation rentals and hotel rooms.

The first county-built section of the Greenway opened in 2013 and runs from Whalehead to the beach access north of Corolla village.

Some privately built sidewalks and paths are located along sections of N.C. 12 south of the village, but the more heavily traveled areas do not have a pathway alongside the twisting two-lane road.

A couple vacationing from Pennsylvania was killed after being struck while walking in the morning in 2013, and a student worker from eastern Europe died in a 2014 hit-and-run while walking home from work late at night.

Pre-construction landscaping has already taken place between Ocean Way and Albacore Street, with minimal clearing of the path and limb removal along where the Greenway will be located, according to Wirth.

“Construction should begin in January with the completion scheduled on or before May 15,” said Wirth.

Send your WRITTEN CONSENT TO AMEND form in NOW. Find it here: http://oshoa.org/written-consent-form-to-amend-the-declaration-2021-form/